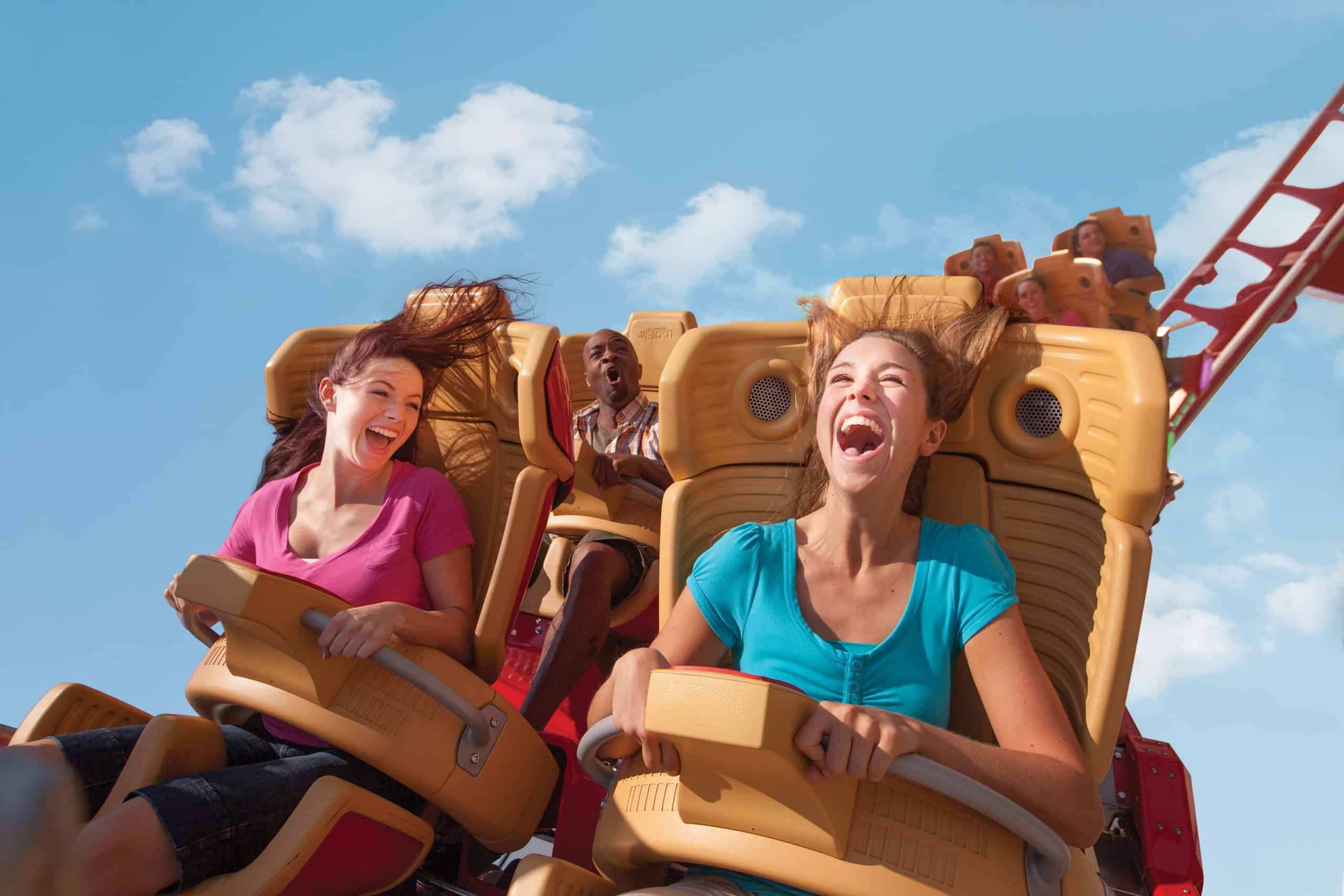 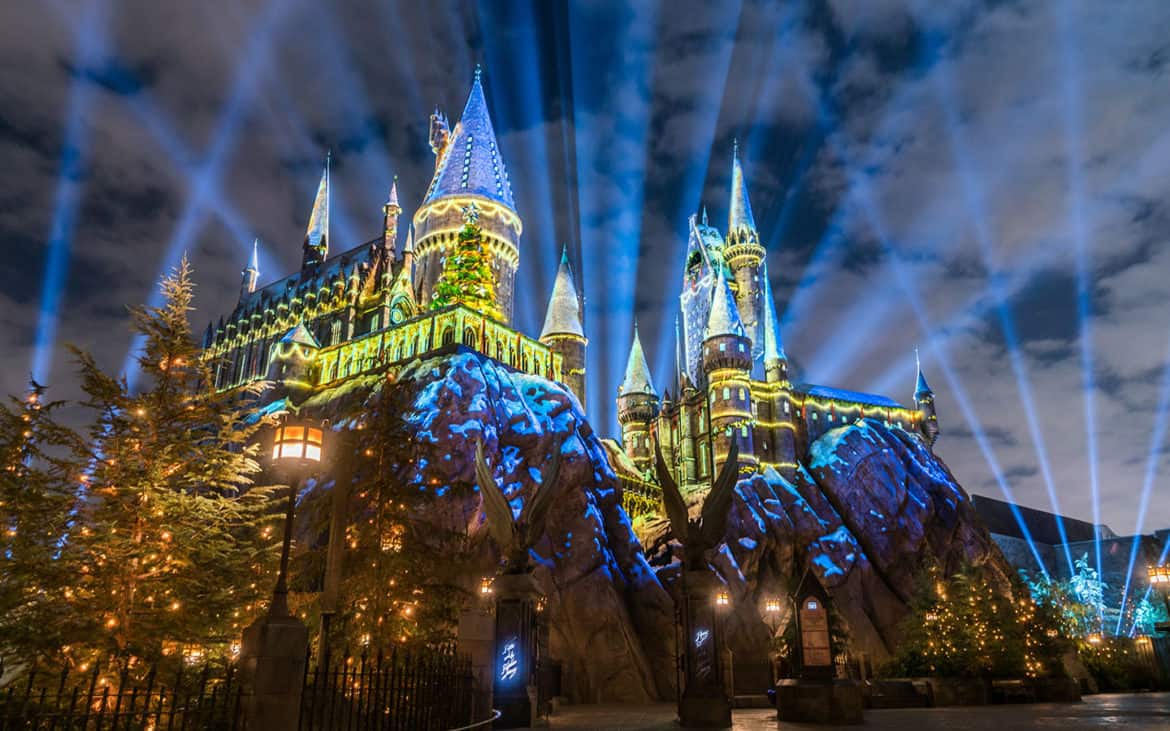 For only the third year, Christmas will be in full effect at The Wizarding World of Harry Potter!

Encompassing both Hogsmeade in Islands of Adventure and Diagon Alley in Universal Studios Florida, the holiday party will have all of the same wonderful experiences from its inaugural showing in 2017 to make guests feel as if they’ve stepped into their favorite films to celebrate the season with Harry and his friends.

There are four different parts to Christmas in The Wizarding World of Harry Potter. A slew of holiday decorations (including individualized decor for each of the wizarding shops) will cover both Hogsmeade and Diagon Alley from end to end; new seasonal food and drink options (which Hot Butterbeer will be a part of) will be on hand; festive live entertainment will get you in the spirit, with new yuletide performances by the Frog Choir, Celestina Warbeck and the Banshees, and London’s street buskers; and, finally – and most excitedly – a state-of-the-art projection-mapping nighttime show, called The Magic of Christmas at Hogwarts Castle, will transform Hogwarts Castle into a holiday wonderland, bringing “Christmas moments inspired by the Harry Potter series to life.”

Christmas in The Wizarding World of Harry Potter runs from Saturday, November 16, 2019 to Sunday, January 5, 2020.

How do you make the Wizarding World even more beautiful? Easy – you take a whole bevy of intricately-detailed holiday decorations and string them all throughout Diagon Alley and Hogsmeade Village.

What really makes the decor stand out is how the elements of each individual store are incorporated into its holiday accoutrements – Weasleys’ Wizard Wheezes, for example, features fireworks worked into its garland, while Spindlewarps has a wreath festooned with giant balls of yarn. This makes pausing and examining the decorations absolutely necessary (as well as absolutely fun!), as just a quick glance is likely to miss some pretty sublime theming.

Just to set the stage for you, we have some video walk-throughs of the marvelous sights. Trust us when we say you’ve never seen Christmas done quite this way.

And be sure to check out our full photo galleries at the bottom of the page for even more decor goodness.

Be prepared for a special holiday version of both the Celestina Warbeck and Hogwarts Frog Choir shows.

Celestina Warbeck, the Singing Sorceress, will be serenading guests with the greatest hits from her chart-topping Christmas album, Nothin’ Like a Holiday Spell: the titular “Nothing Like a Holiday Spell,” “A Witch and Wizard’s Wintry Wondrous Land,” “My Baby Gave Me a Hippogriff for Christmas,” and “Accio Christmas” (which is calypso-inspired).

The Frog Choir, over in Hogsmeade, meanwhile, will perform the traditional “We Wish You a Merry Christmas” along with the wizarding carols of “Christmas at Hogwarts,” “The Most Magical Yule Ball of All,” and “I Cast a Spell on Father Christmas” (which asks young witches and wizards to “be sure of the incantation before casting a spell”).

Be sure to read our in-depth impressions of Celestina’s and the Frog Choir’s new holiday shows in our review.

For 2017’s inaugural Christmas in The Wizarding World of Harry Potter, three new seasonally-exclusive dishes were added to the magical menu. For 2018, however, none of them is returning – instead, we’re getting a brand-new holiday treat: the Holiday Turkey Plate ($15.99), which comes with two big slices of oven-roasted turkey, wild-mushroom-and-sage stuffing, brown-butter-and-walnut Brussel sprouts, root veggies, and a roasted tomato, accompanied by traditional gravy and spiced cranberry sauce. It’s actually enough for two people to eat smaller, though still comfortable, meals, and you can find it at both The Three Broomsticks and The Leaky Cauldron.

And let’s not forget to mention that the limited-time Hot Butterbeer is also on tap, although this is the case every winter in the Wizarding World.

While both Universal Studios Japan and Universal Studios Hollywood had been enjoying projection-mapping shows revolving around their Hogwarts Castles since early 2017, Orlando had been left out in the cold – until that year’s Christmas, that is. The Magic of Christmas at Hogwarts Castle wraps the ancient building in the sights and sounds of the season, including a majestically-large Christmas tree, the Hogwarts ghosts singing carols, a recreation of the Yule Ball, and students riding broomsticks and creating snowmen. It’s a beautiful show, and one every bit worth watching.

Speaking of which: unlike any of the other elements of Universal’s Holidays celebration – whether that be the Holiday Parade Featuring Macy’s or the Mannheim Steamroller concerts – the wizarding projection-mapping show doesn’t have set showtimes beyond the evening’s inaugural performance; all the company usually says is “ongoing from dusk until park close.” Because of this ambiguity, and because of the sheer interest in The Magic of Christmas at Hogwarts, crowds can be heavy not only in front of the castle, but all throughout Hogsmeade as muggles struggle to find a good spot to catch the next performance.

Worry not, however – we have some secret wizarding tips to help you get through the experience intact. Whether you’re looking for insight on where the best vantage points are, where the least-crowded viewing areas are located, or how to safely (and efficiently) bypass the area altogether on your tour of Islands of Adventure, we have you covered.

What time does The Magic of Christmas at Hogwarts Castle start?

Remember, the company only lists the first performance:

What are the subsequent showings?

What are your secret wizarding tips?

Finally, just a small-but-still-incredibly-magical point to consider: even if you’re moving through the area in the 13-minute lull between Magic of Christmas showings, you should still pay close attention to Hogwarts – Universal leaves the projectors on the whole night through, showing a castle that is covered in snow. In this way, guests who visit during the holidays will be able to see a different version of the iconic building no matter what.

For even more on The Magic of Christmas at Hogwarts Castle, be sure to read our in-depth impressions in our review.

The Magic of Christmas at Hogwarts Castle – photo gallery